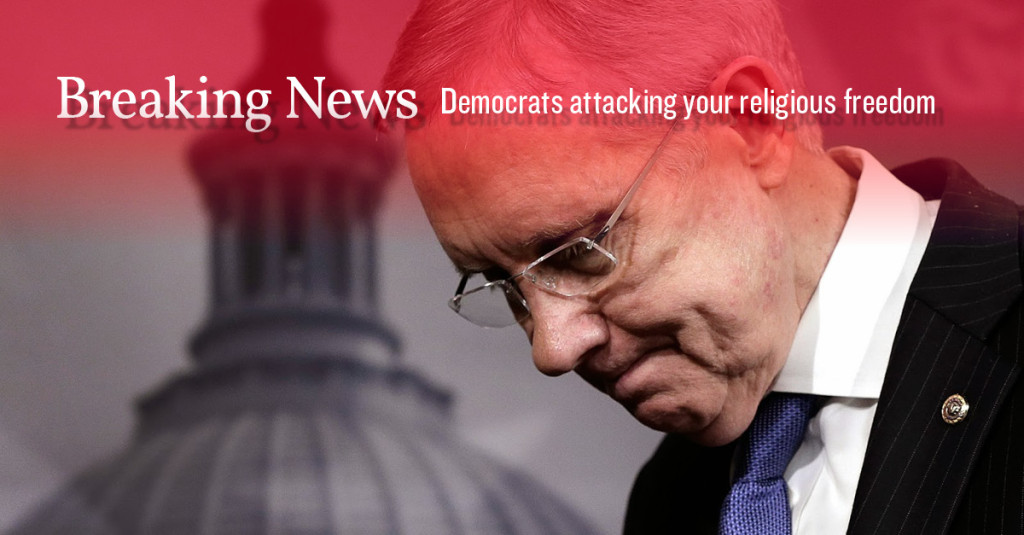 Harry Reid and his liberal colleagues are looking to take away your religious freedom.

They are looking to fast track a bill through the Senate and pushing for a vote to overturn last week’s Hobby Lobby ruling from the Supreme Court.

Sign our petition to stand for religious freedom if you agree that government should not be able to force anyone to violate his or her faith.

Congressional Democrats unveiled legislation Wednesday that would override the Supreme Court decision in the Hobby Lobby case by requiring most employers to provide federally-required contraception and other health services even if they have religious objections.

The legislation, being introduced by Democrats in both the Senate and the House, would require all employers to abide by the contraception mandate included in the Affordable Care Act — even if they claim to have religious objections.

The Hobby Lobby v. Burwell decision, a 5-4 ruling by the high court last week, said that business owners with religious objections could exercise their right to not cover some kinds of contraception in employee health insurance packages. In response, Democrats vowed to make access to contraception a legislative priority for the remainder of the congressional term.

“One thing we’re going to do during this work period, sooner rather than later, is to ensure that women’s lives are not determined by virtue of five white men,” Senate Majority Leader Harry Reid (D-Nev.) said on Tuesday. “This Hobby Lobby decision is outrageous, and we’re going to do something about it. People are going to have to walk down here and vote, and if they vote with the five men on the Supreme Court, I think it’s — they’re going to have — be treated unfavorably come November with the elections.”

Efforts to craft a bill were spearheaded by Sens. Patty Murray (D-Wash.), Mark Udall (D-Colo.) and Richard Durbin (D-Ill.), among others. Their proposals were merged into a bill that could come up for a vote in the Democrat-controlled Senate as early as next week.

“We have legislation to ensure that women continue to receive access to contraceptive coverage, even in wake of the horrible decision by Supreme Court,” Reid said.

The Senate bill being announced Wednesday by Murray would override the Supreme Court decision by requiring for-profit corporations like Hobby Lobby to provide and pay for contraception and any other form of health coverage mandated by the Affordable Care Act.

The bill would override the Religious Freedom Act, forcing most employers to comply with federal health-care requirements despite their religious objections. It would, however, include an exemption for houses of worship and an accommodation for religious non-profits.